Still travelling the UK now (see here for details), the Japan Foundation’s 2013 touring programme (Once Upon A Time In Japan) is focused on recent films that examine contemporary Japan through the prism of the past, whether personal or public.

I have written a round-up of the festival for Film4.com, but am posting a fuller version here, that includes additional capsule reviews of Castle Under Fiery Skies, Ninja Kids!!!, and all three screened episodes of Kaidan Horror Classics.

Once Upon A Time In Japan: Nostalgia and Nation-Building in the Japan Foundation’s Touring Programme

In cinema, the ghosts of the past are always haunting the present. Those images we see flickering on the screen were preserved some time before on film or digitally, and are now being resurrected by the light of the projector, pouring their life-like apparitions into the theatre’s shadows. So it seems apt that, in celebrating its own tenth anniversary, the Japan Foundation Touring Film Programme should offer a selection of contemporary features that all, in different ways, look back to the past. For in this programme, entitled Once Upon A Time In Japan and travelling the UK throughout February, every film explores the history of individuals, of a nation, or of cinema itself – while casting light on the present, too.

Kuroki Kazuo’s The Blossoming Of Etsuko Kamiya (2006), e.g., is framed by an elderly married couple reminiscing (from a hospital rooftop) about their awkward engagement during the traumatic final period of the Pacific War, while its staid camerawork, its stately pacing (“we have all the time in the world”, Etsuko’s husband Nagayo says), its elegiac tone and its thematic focus on the passing seasons all hark back to the bygone (yet timeless) style of late master filmmaker Ozu Yasujiro (Tokyo Story). It is hardly a coincidence that Nagayo, and later his son, are engineers – for in this intimate drama we are witnessing the wartime survival and future (re)construction of Japan.

Similar notions of nation-building can be found in Tanaka Mitsutoshi’s Castle Under Fiery Skies (2009), in which rural temple carpenter Mataemon is commissioned by Lord Oda Nobunaga (a real-life 16th-century unifier of Japan) to construct a then unprecedentedly tall five-story donjon on Mount Azuchi. Building on real events in Japan’s history under the Shogunate, Tanaka erects an exemplary myth of patronage, politics and art, while suggesting that Mataemon’s modernist vision of equality and solidarity may, in his own feudal times, have been a mere castle in the sky.

There are of course other, more fanciful ways of looking back. In Baba Yasuo’s Bubble Fiction: Boom Or Bust (2007), young Mayumi travels back 17 years in a washing machine that doubles as a time machine, on her quest to prevent the bursting of Japan’s economic bubble (and the break-up of her parents) that made her the indebted bar hostess she is today. There is little subtlety to be found in the resulting madcap time-travel comedy, closer both chronologically and in other respects to Hot-Tub Time Machine (2010) than to Back To The Future (1985), but Baba’s film nonetheless affords a view of the massive recessionary changes undergone by Japan in a mere two decades, while dreaming of a future return to the nation’s former affluence. 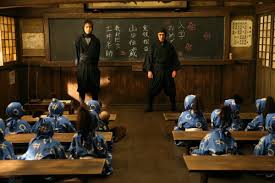 Similarly exuberant and even more surreal, Miike Takashi’s Ninja Kids!!! (2011) transposes the everyday formative experience of young pupils onto a time of assassins and magic, even though the mythic/historic milieu remains littered with modern anachronisms (the first-grade protagonist wears spectacles, the school cafeteria serves burgers, a race is begun with a starting pistol). It may be overlong and, at least to adult tastes, overbroad, but Miike’s comicbook adaptation gives viewers a schooling in the continuities between then and now – as well as in the timelessness of snot, fart and pooh jokes.

Meanwhile the three discrete episodes from the television series Kaidan Horror Classics (2010) revive not just a traditional kind of ghost story more recently supplanted by the technology-focused J-Horror of, say, Ringu (1998) or Pulse (2001), but also reveal characters haunted by their individual pasts. In Tsukamoto (Tetsuo, Vital) Shinya’s episode The Whistler, set during the Second World War, a woman suffers nightmarish anxieties about the imminent deaths of her conscripted boyfriend and her invalid sister, before being miraculously reconciled to a belief in a benevolent universe. In the morally nuanced The Nose, directed by Lee Sang-il (whose 2006 feature Hula Girls is also screening as part of the Japan Foundation’s 2013 programme), a mendicant monk with a hideously deformed nose allows a young boy to drown rather than face his mockery – and so, after helping bring the boy back from the dead, is confronted with his own and his community’s monstrousness. In The Days After, directed by the peerless Kore-eda Hirokazu (After Life, I Wish), a couple plays daily with the visiting ghost of their deceased son, while also playing out their unresolved feelings of grief, loss and guilt. All three episodes depend on delicate ambiguities rather than the cruder shock tactics of much Noughties horror and are, despite their supernatural inflections, thoroughly grounded in human concerns.

Guilt also plays its part in Zero Focus (2009), Inudo Isshin’s melodramatic thriller in which the unexpected disappearance of Teiko’s older husband in1957 leads the young woman to disinter a buried history of shame from Japan’s wartime and postwar period. The film inevitably evokes Imamura Shohei’s similarly premised A Man Vanishes (1967), while adding Hitchcockian clifftop suspense, a giallo-esque killer-in-red, and a feminist preoccupation with the silent sacrifices and sufferings of women in the creation of the modern Japanese state.

A similar (and similarly complicated) feminism can be discerned in Narushima Izuru’s Rebirth (2011), my personal favourite of this year’s selection (although I missed the late Wakamatsu Koji’s highly regarded 2007 docudrama Red Army Faction). “Please give us back those days of lost happiness,” pleads Erina’s mother Etsuko, concerned that her young daughter, abducted as an infant by her husband’s lover Kiwako and not returned till four years later, will never be the same again. Now an adult student and estranged from her family, Erina – now facing her own motherhood – retraces a notorious past that she cannot remember, but which has changed her life forever, and uncovers a story of an unconventional mother-daughter bond, a truly devastating loss and – ultimately – the possibility of renewal and change. In Rebirth, the unknown country of the past becomes, when viewed clearly and without prejudice, a model for a different, better future.

Last but not least, Katabuchi Sunao’s gentle anime Mai Mai Miracle (2009)  multiplies its nostalgia to create a layered, eternally returning past. Set in a rural idyll of mid-1950s Japan, it follows the childhood experiences of tomboy Shinko and her reserved new friend Kiiko – although their imaginative play transports them much further back to the coastal Kingdom of Suo that stood on those fields 1000 years earlier. Capturing the same playfully elegiac tone as Miyazaki Hayao’s My Neighbour Totoro (1988), Mai Mai Miracle sets joyous scenes of pre-adolescent adventure against more serious themes of loss and death, and shows a nation half-unearthing, half-inventing its past in order to work through present problems towards a tomorrow that is in fact Japan’s today. In one sequence, Shinko and her friends sneak into their local cinema to witness their first on-screen kiss (in an American oater), with Shinko expressly acknowledging that one day she too will probably kiss boys in that way. It’s the ossified, fictive world of cinema reflecting its viewers’ reality, even their future – much as we, watching Shinko’s childhood, recognise something of our own, as well as of the postwar emergence of Japan itself in a landscape that is always shifting.

2 thoughts on “Once Upon A Time In Japan”