Just released from an institution, a mentally deranged young man travels to a coastal town in search of his estranged child. Amidst a traumatic confusion of dreams, flashbacks and hallucinations, he murders a slew of people on the way and is then himself killed – but not before he has handed down to his child a legacy of psychosis.

It is a plot made familiar (if that is the word) by Romano Scavolini’s giallo shocker Nightmare in a Damaged Brain (1981), and a plot-type that sits comfortably within the sensationalist confines of the slasher or psycho-horror genres. Yet in Lodge Kerrigan’s feature debut Clean, Shaven (1993), the contours of this plot, and of genre itself, are deployed not so much to affirm as to confound our expectations of cinema – and more broadly to confront our prejudices about the nature of mental illness. We must decide for ourselves how much of the summary given in the opening paragraph is true, and how much unfolds merely in an overactive mind (the protagonist’s, or indeed our own).

Wide-eyed, agitated and clearly very disturbed, Peter Winter (Peter Greene) breaks into a car, and is then heard (but not seen) violently beating a screaming young girl in the street. After lifting a large, plastic-wrapped bundle into the car’s boot, he drives on to the small fishing community of Miscou Island, New Brunswick, where, in a motel room, he cuts his hair, shaves his cheeks and engages in hideous acts of self-harm. 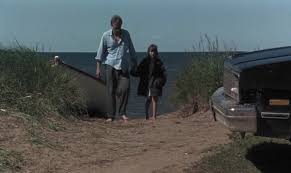 The next morning he visits his aloof mother (Megan Owen), and inquires after the whereabouts of his young daughter Nicole. Meanwhile Detective McNally (Robert Albert) is investigating the murder of yet another young girl whose mutilated body was found just outside the motel, and almost immediately he zeroes in on Peter as the prime suspect. Some frenzied library research leads Peter to discover that Nicole has been put up for adoption. After further excruciating self-harm, Peter finally tracks Nicole (Jennifer MacDonald) down and takes her off alone to the beach – just as Detective McNally closes in.

Although Clean, Shaven was made sporadically over three years on a micro-budget of some US$60,000 and was shot on 16mm by a first-time director working with a cast of unknowns, it was quick to win positive critical attention and a certain notoriety. At its premiere at Telluride it was championed by the likes of Roger Ebert; and subsequent reports from Cannes and Sundance of audience members fainting or even fleeing ensured the interest of distributors. The film’s original theatrical trailer (included as an extra in Criterion’s excellent DVD package) reveals precisely what was perceived as its most marketable attractions: a barrage of plaudits from respected reviewers, and then a brief POV sequence in which Peter approaches little Nicole swinging in the back garden, followed by a girl’s piercing scream on the soundtrack. Put simply, Clean, Shaven was being promoted as high-end horror.

Of course such a characterization is misleading, but no more so than the film’s own manipulative strategies of self-representation. For Kerrigan uses the recognisable furnishings of the psycho-killer and detective genres to cloud our understanding of what we see (or do not see) in Clean, Shaven. While horror is certainly to be found here, not to mention the most repellent varieties of gore, it is a horror that resides in the imagination as much as in the real world, a horror that viewers themselves help to construct as they piece the film’s fragmented parts together according to their own tendencies, (mis)apprehensions and desires. Like Detective McNally, we are exposed as prisoners of our own preconceptions; and like the film’s mirror-shy protagonist, we too may be unsettled by the images that the silver screen reflects back at us so unforgivingly.

Clean, Shaven is, along with Roman Polanski’s Repulsion (1965) and David Cronenberg’s Spider (2002), one of cinema’s boldest attempts to show the workings of paranoid schizophrenia from the inside out. Bombarded with jarring cuts, hallucinatory segues, narrative discontinuities and a multi-layered (yet flatly monaural) soundscape of eerie voices, amplified noise and static, viewers are disoriented from the start, and left struggling to grasp what is real and what is a mere artifact of Peter’s illness. Here Tony Martinez and John Parsons’ sound design, as well as Hahn Rowe’s rumbling score, organize auditory experience as an eerie radio station that is never quite properly tuned; and while this directly reflects Peter’s stated conviction that he has a receiver and transmitter medically implanted in parts of his body, it also serves as a vivid aural metaphor for the film’s fractured, elliptical narrative, where any sort of clear or comforting signal has long since ceased getting through. It also anticipates the film’s final, haunting scene, in which Nicole tries (in vain) to make contact with her lost father through a boat’s crackly radio.

By matching his presentation of the world to his protagonist’s distorted perception of it, for a little under 80 minutes Kerrigan makes schizophrenics of us all, while inviting an empathy with his subject that is seldom seen in films dealing with the mentally ill. This subjective style is all the more striking when compared to the director’s more recent Keane (2004), whose otherwise similar story (an alienated, unhinged father searching for his daughter) is shot with a contrastingly cool objectivity. Both films, however, are unblinkingly focused on figures more usually demonized, marginalized or totally ignored, in cinema as much as in life.

Sparse on dialogue, unnerving in its composition and electrically intense in its performances, Clean, Shaven situates itself at the very edge of cinematic expression, sending its scrambled message out only to those who are willing and able to see things from its protagonist’s disturbed point of view, according to which the world is a place of unfiltered aggression, menace and hostility. “They’re killing people out there,” Peter tells his mother in response to her suggestion that he needs to get out more; and his words, though undoubtedly paranoid, will also turn out to be chillingly prophetic. This, to the schizophrenic, is an all too real horror (and legacy), far more harrowing than the slash and dash of genre’s fantasy.