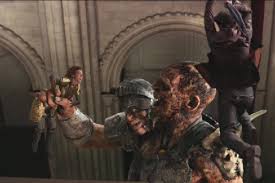 Synopsis: Bryan Singer (The Usual Suspects) retells Jack And The Beanstalk as a live-action/CGI/3D extravaganza.

“Well that went down better than I expected,” declares farmboy Jack (Nicholas Hoult) to princess Isabelle (Eleanor Tomlinson) after the young lovers, in an uncontrolled descent from a gigantic collapsing beanstalk, narrowly avoid impalement on a ploughshare. Jack’s words may well reflect what many viewers feel about this latest effects-heavy blockbuster from Bryan Singer (The Usual Suspects, X-Men), which, without ever quite breaking the mould of fairytale adaptations, manages to be charming enough as undemanding matinee-style entertainment.

The film’s storybook origins are advertised right from the opening as deftly intercut scenes show the pre-teen Jack and Isabelle each having the legend of the giants read to them by their respective parents, and their dreams of escapist adventure accordingly sown. Ten years later, those seeds are reaped, as Jack unwittingly comes into possession of the magic beans that will sweep him, Isabelle and a handful of others into a bigger if not better world, before bringing them crashing back down to earth.

The beanstalk bridges not only the literal space between the medieval hamlet of Cloister and the giants’ floating vertical kingdom of Gantua, but also the more metaphorical gulfs between adolescence and adulthood, lower and upper social strata, fiction and reality. Singer takes viewers to cloudcuckooland while rooting his state-of-the-art CGI creatures in live action and a coda set in contemporary London. There is plenty of spectacle here, although given that Gantua is said to lie/fly between earth and heaven, we can only imagine how much more exciting things might have been if these savage, sweary monsters had chosen to take their gigantomachy upwards rather than downwards. As it is, we get adventure, romance, a castle siege, and Ewan McGregor reprising his knightly role (and even a key line) from the Star Wars prequel trilogy.

In A Nutshell: Set somewhere between heaven and earth, Singer’s slick but safe adventure occupies the middle ground of family matinee entertainment.