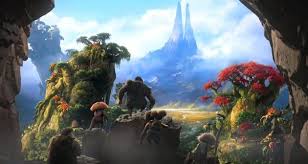 Synopsis: A 3D animation from writer/directors Kirk De Micco (Space Chimps) and Chris Sanders (How To Train Your Dragon), which sees a family of Neanderthals emerge from their cave of conservatism in search of a new Tomorrow.

Review: Meet The Croods – a family of troglodytic Neanderthals who have survived so long (unlike all their neighbours) by closely following father Grug’s rules: eschew all novelty, never leave the cave at night (and only rarely during the day), and “never not be afraid”. Yet even as light-loving teen daughter Eep starts rebelling, along comes Guy, a young Homo Sapiens with new-fangled fire and tales of the imminent End of the World. When tectonic shifts force the Croods from their home, their flight will bring them into an (uneasy, for Grug) alliance with Guy, as they race together to a place called Tomorrow, along the way prototyping shoes, polaroids and passenger planes.

Intergenerational adaptability may be the key theme of The Croods, but you will not hear anyone uttering the word ‘evolution’ in the film – presumably because of the economic folly in targeting an animation at American families while alienating the country’s sizable religious constituency. This perhaps explains the film’s mixed message, in which the blind chance of Darwinism and the prophetic visions of a more providential worldview are made to share onscreen space as happily as a predatory sabre-toothed tiger and a caveman who should be its natural dinner.

The Croods starts out as The 3D Flintstones, but once the family has ventured out from its bedrock into the strange lands beyond, it becomes more like Quest For Fire (1981) minus the genital biting, Avatar (2009) minus the aliens, or Ice Age (2001) minus the talking animals. These gaps are filled with fast-paced adventure, inventive visuals, and plenty of comic business – as well as with a premodern (yet familiar) father who, faced with a rapidly changing world, must choose between going the way of the dinosaurs or learning to live life on the edge.

In A Nutshell: Postmodernism goes premodern in this fun animated family adventure that fills its late Ice Age setting with anachronistic details, while tracing a father-daughter relationship that could come from any time.