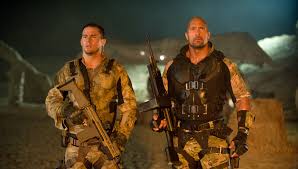 Synopsis: Director Jon M. Chu ‘steps up’ from dance sequels (Step Up 2: The Streets, Step Up 3D) to this fantasy action follow-up, based on a range of military action figures.

Review: 2013 has seen the rise of a new Hollywood phenomenon: let’s call it the Palicki curse. Adrianne Palicki, of television’s Friday Night Lights, has recently played parts in not one but two old-school reactionary action flicks which were then shelved, radically changed in post-production, and finally released in 2013. Yet where the remake of Red Dawn is as moronic as the 1984 original, G.I. Joe: Retaliation knows exactly how stupid it is – and might, for that very knowledge, be deemed as at least half-wise.

There’s Dwayne ‘The Rock’ Johnson pummelling bad guys, Storm Shadow (Lee Byung-hun) returning from the dead (twice!) and even an anointing cameo from Bruce Willis. The ret-con plotting sees the complexities of geopolitics reduced to a roomful of men with their fingers on nuclear buttons, while the US President (Jonathan Pryce) is subjected to torture (“they call it a waterboard – but I never got bored”) and lots of things (including the entire City of London) explode. And in case you are unable to keep up with the ADHD approach to mayhem, all the money shots are replayed over the closing credits.

Like its predecessor G.I. Joe: Rise of the Cobra (2009), Retaliation is rendered not so much redundant as deliriously postmodern by the satire of Team America: World Police (2004). Meanwhile, it is easy to spot Palicki – after all, she plays one of only two women in the film. Otherwise, it is all boys and their (Hasbro) toys.

In A Nutshell: Quite probably critic-proof, this defiantly dumb-assed action in the Transformers mould will appeal to men nostalgic for their childhood toys, as well as to actual boys.