My review for Grolsch Film Works. 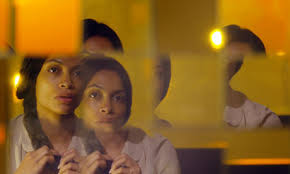 Trance opens with a cocky, well-dressed James McAvoy shot in tight close-up as he delivers a brisk monologue on the history of art and art theft – even as Olympian director-of-all-genres Danny Boyle (Trainspotting, Sunshine, Slumdog Millionaire, etc.) openly steals this prologue from Spike Lee’s Inside Man (2006), and will later appropriate motifs from heist pictures and film noir while artfully taking us through a convoluted, tricksy plot that has apparently been reverse-engineered from No Way Out (1987) and Memento (2000).

“Everyone knows amnesia is bollocks,” declares Nate (Danny Sapani) as he pulls another fingernail off screaming Simon (McAvoy). Simon was the inside man on a heist at an upmarket auction house but, hit hard on the head by gang leader Frank (Vincent Cassel) in the chaos of the robbery, he fell into a coma and can no longer remember where he hid the valuable Goya painting that Frank and his three associates are pursuing. The torture gets them nowhere, so the gang turns to hypnotherapist Elizabeth (Rosario Dawson) to help recover Simon’s lost memories – only some of the secrets buried in Simon’s mind are better left to their shallow grave.

Adapted by Joe Ahearne and regular Boyle collaborator John Hodge from Ahearne’s 2001 telemovie of the same name, Trance begins as a fairly conventional crime thriller, before sending its main players and viewers alike into a multi-layered labyrinth of psychodrama and string pulling. The turning point comes about halfway through, when Elizabeth places Simon in an MRI machine and plays him a sequence of photographic images to jog his memory. For at this point we start losing track of whether what we see is actually happening in the film’s story, or is merely taking place in a character’s head, as Trance starts putting us all into its titular state of hallucinatory disorientation.

All these MRIs, mesmerisms and manipulated memories also introduce a markedly metacinematic note. For what is a movie if not a sequence of projected images (like the ones presented to Simon) that interact with both our conscious and unconscious mind to provoke a response over which we do not always have control? Trance delivers its thrills and seductions, its twists and its turns, its psychological sublimations and sexual deviations, with utter confidence – but at the same time, even as it takes us for a ride, it lets us know that this is exactly what it is doing, and defies us to get off – or, to borrow a metaphor from the film itself, if Trance allows you to feel that you are in the driver’s seat, that is only because it has tied your hands to the steering wheel.

Issues of control are key to Boyle’s film, and if it is a narrative of recovery, then it will turn out that neither Simon’s memory nor the Goya painting is the only – or even the most important – thing being liberated here. Everyone, you see, has a past – but only some can let go and move on.