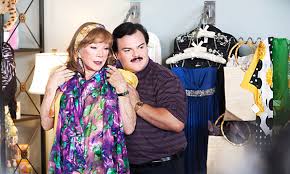 Sometimes a film can take on the character of its protagonist in the particulars of its style, and so it is that Richard Linklater’s Bernie, like the man after whom it is named, is joyously camp and colourful, and not a little eccentric – even unhinged.

Bernhardt Tiede II is a real person, but the text at the film’s beginning that promises us a ‘true story’ is presented – paradoxically – as the curlicued title of a story book. Tiede and the story’s other principals may be dramatised by actors (including Linklater’s past collaborators Jack Black from School Of Rock and Matthew McConaughey from Dazed And Confused), but the many folk who provide this film with its vox-pop chorus are Tiede’s real friends and fellow townspeople, offering a commentary on proceedings which, for all its gossipy tendentiousness, is the genuine article. For in this strange but (mostly) true tale, fact and fiction make curious bedfellows, and questions expressly posed by further storybook titles – “Who is Bernie?”, “Was it romance?”, ”Was Bernie gay?”, “Guilty or innocent?” – receive answers that are in no way univocal.

Though an outsider from Louisiana and of ambiguous sexuality, Tiede (Black) is welcomed into the bosom of small-town Carthage, in east Texas, where he takes – and quickly takes to – a job as assistant director in a funeral home. Creative, caring, kind and full to the brim with community spirit, Tiede is both a born salesman and well liked by all who meet him. Tiede does not just ‘cosmetise’ the town’s dead, but follows through with attention to those left behind, helping the bereaved through their grief with smiling visits and even gifts – and so he comes to meet the widow Marjorie Nugent (Shirley MacLaine), a mean old heiress universally hated for her peremptoriness and incivility.

As Tiede gradually becomes Nugent’s constant companion, escorting her on world tours and bending over backwards to fulfill her every unreasonable demand, a strange relationship develops between this mismatched pair. When Nugent drops out of the public eye entirely, and Tiede starts using his power of attorney to plough Nugent’s money into local goodwill projects, Nugent’s accountant Lloyd Hornbuckle (Richard Robichaux) and the town’s tenacious DA Danny Buck Davidson (McConaughey) smell foul play – but even when, in August 1997, Nugent’s body is discovered hidden in her own freezer, some nine months after she was shot four times in the back, the Carthage community rallies in support of its favourite citizen, and still refuses to regard Tiede as anything but a man wrongly convicted of first-degree murder by a jury of ‘trailer trash’ from nearby San Augustine.

Co-written with Skip Hollandsworth, whose 1998 Texas Monthly article “Midnight In The Garden of East Texas” first drew the director’s attention to Tiede, Bernie is a morally confounding comedy that flips our every expectation on its head. Here a confessed liar and murderer is transformed into an amiable local hero, a dogged lawyer is ridiculed as the manipulative villain of the piece, and the people of Carthage adopt a far more flexible and forgiving attitude towards justice than is usually associated with Texas, known for its inclemency and executions.

Of course, the facts of the case tell their own story, but in focusing on the often hilarious views of Tiede’s fellow townspeople, Linklater has created an affectionate and decidedly off-kilter portrait not just of a man, but also of the community that chooses to embrace him. The film may be a love letter to east Texas (where Linklater was born and bred), but behind all the sunny smiles, country courtesy and good nature hides a very dark story of a criminal undertaking – because, no matter which way you dress it, a corpse is still a corpse.