Since Julian Richards’ thriller is getting a DVD rerelease from Soda Pictures on 6th May 2013, here is my review, originally published on EyeForFilm. 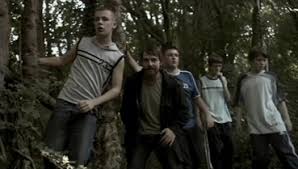 There must be something in the water.

As Tim Hunter’s River’s Edge (1986), Jacob Aaron Estes’ Mean Creek (2004) and James Watkins’ Eden Lake (2008) can all attest, films concerned with the more sociopathic aspects of disaffected youth tend to have an aquatic reference in their title, marking that fluid, liminal state which defines both bodies of water and adolescence itself. There is, however, no reference to water in the title of Julian Richards’ latest film, and nor is there a retrospective narrative frame of the kind found in Rob Reiner’s otherwise similar Stand By Me (1986), or even in Gregory Wilson’s more blistering The Girl Next Door (2007). For while Richards’ Summer Scars is certainly interested in the formative experiences of a group of young teens, he leaves it entirely to our imagination what they are going to become. This, far more than the rising tensions shown within the story itself, is what makes the film so haunting. Some scars, we suspect, may never heal.

In fact, the scars are already there to be seen, even before the adventure of these six children in their early teens gets underway. Much as the film’s title sequence coats the estates of St Davids in graffiti-styled freeze frames and a swaggering hiphop soundtrack, these fourteen-year-olds are merely trying on postures of urban toughness that do not (yet) quite fit – talking the talk without quite walking the walk. Skiving off school to spend a day in the nearby woods, Leanne (Amy Harvey) and her brother Mugsy (Ryan Conway) have nicked a woman’s moped, Jonesy (Darren Evans) flirts with Satanism, and Bingo (Ciaran Joyce) and Paul (Jonathan Jones) are boisterously jockeying to become the group’s alpha male. “I’m gonna bust a cap in your ass,” says Paul hesitantly, the empty absurdity of the threat only underlined by his incongruous Welsh accent, while Bingo has brought beers along and boasts of the real gun that his father, now serving time, has stashed away. They have all been touched by an earlier joy-riding accident, and the deep scars on the legs of Paul’s wheelchair-bound brother Ben (Chris Conway) are only the most visible signifiers of the shared guilt, uncertainty and fear that have sealed this group as a semi-delinquent unit.

Finding a pentagram painted on a wall, Jonesy proposes an improvised game of Oiuja to conjure the devil, but instead summons up Peter (Kevin Howarth), a bearded, asthmatic man-child searching the woods for Jesus, the significantly named dog that will, in Richards’ secular nightmare, remain lost. At first the kids are charmed by ex-soldier Peter – after all, he takes their rebelliousness, and the fact that he has just been hit by their stolen moped, entirely in his stride, he shows the boys a vantage point from which a couple can be seen engaged in some roadside intercourse, and he even intervenes when two older boys try to muscle in on the group’s turf. Soon, however, the life lessons that Peter offers to teach his young wards acquire the menace of madness, and escalate into a terrifying lesson for us all in the nature of bullying and machismo.

Richards’ film may be an ultra-low budget affair, but it is also a punchy thriller that wastes no time getting its characters out of the urban jungle to a place where social realism clashes with the fairytale symbolism of the deep dark woods. If Peter is furtive and fugitive, unstable and aggressive, his conduct merely reflects (and amplifies) the conflict between violence and vulnerability that is already beginning to assert itself in his new playmates as they approach adulthood.

The weight of Summer Scars is carried by the acting of Kevin Howarth, who offered a similarly edgy turn in Richards’ breakout feature The Last Horror Movie (2003) – but the younger cast members are also very convincing, the naturalism of their performances to an extent excusing the film’s occasional home-video look (it was in fact shot on HD) as part of a ‘documentary’ effect. The film clips along at a terrific pace (at a mere 68 minutes, it barely qualifies as a feature at all), expertly building up suspense all the way – but Richards wisely chooses to end things on an inconclusive note.

It remains ultimately unclear whether all the gang has (metaphorically) crossed the bridge along with Bingo, and indeed whether there can ever be any going back – but when we last glimpse them hanging out in a children’s playground, they seem marooned and utterly out of place, their innocence, like Peter’s dog, forever left behind and lost in the woods – if indeed their innocence, again like Peter’s dog (or Jesus himself), ever existed at all.