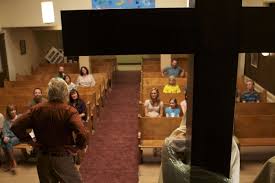 Synopsis: Responding to an on-line invitation to group sex with an older woman, students Travis, Billy-Ray and Jarod head out one night to Cooper’s Dell, en route sideswiping a parked car in which Sheriff Wynan is being fellated. Wynan sends Deputy Pete after the boys’ car. Inside Sara’s trailer, the boys are drugged. Jarod wakes, caged, in the Five Points Church, and watches preacher Abin Cooper preside over the murder of a gay captive. The body is thrown into the basement below, where Travis and Billy-Ray use a protruding bone to cut through their bonds. Billy-Ray flees into an armoury, where he and his pursuer shoot one another. Outside, Pete hears the gunfire, and while radioing in to Wynan, is shot. When Abin threatens to expose Wynan’s homosexuality, Wynan considers suicide, but instead calls the ATF. Agent Joseph Keenan is immediately ordered to lead a taskforce.

Now armed, Travis flees the compound, but is shot by Wynan, who is accompanying the ATF team. As a gunfight breaks out, Keenan unhappily receives orders from his superiors to kill everyone inside. Sara’s daughter Cheyenne begs an agent to let her and the children out, but he is shot by Sara. As Cheyenne pleads with Jarod to talk to the agents before they are all killed, Sara intervenes and is accidentally shot by Cheyenne. Jarod and Cheyenne surrender to Keenan, but are both summarily executed by another agent. When a deafening trumpet blares, Abin and his surviving congregants disarm and come out, believing that the rapture has come.

At a hearing, Keenan learns that he is to be promoted, and that, as terrorists, Abin and his flock will be locked away for life. Keenan reveals that the amplified trumpet was a prank by neighbouring marijuana dealers whom Abin’s congregants had been harassing.

Review: Ever since his feature debut Clerks (1994), polyhyphenate filmmaker Kevin Smith has been known as the foul-mouthed king of zing, peppering his films with fast, often jawdroppingly profane dialogue (when, that is, he is not bogging down films like Chasing Amy in patience-stretching didactic monologues). There is plenty of zing in Smith’s latest, Red State: in its first act, three college kids are heard discussing what they are hoping to do with the older woman who has invited them, via an on-line dating service, to have group sex with her; and later, a particularly wry riposte from ATF Agent Joseph Keenan (John Goodman) about the fundamentalist mindset will actually be met (deservedly) with the line ‘Zing!’.

This trademark zing, however, extends beyond the characters’ pacy, racy exchanges to the way that Red State‘s scenes unfold, with one narrative surprise followed fast by another. Take the sequence where the three boys are driving out to their nocturnal assignation in rural Cooper’s Dell: en route, they accidentally wing a car parked in the shadows (zing!); as they get out to see the damage, a male figure suddenly sits up in the driver’s seat (zing!); startled, they flee so quickly that they fail to notice a second male figure sit up who has clearly been fellating the first (zing!); and then, as the driver heads to the police station, we discover that he is the local sheriff (zing!), and married (zing!). This episode reflects in miniature an overall story structure in which the very separate worlds of three liberal young men, a family of murderous religious extremists, a taskforce of federal agents, and some marijuana-growing ‘eco kids’, all violently sideswipe one another to produce a dialectic of clashing values and surprising juxtapositions against the backdrop of America’s post-9/11 culture wars.

When, amidst heavy gunfire from all sides, Keenan is heard complaining, “You said this was going to be a simple in and out”, his words mirror what the sex-seeking college kids had also imagined (albeit in a rather different context), before discovering that their hot date with Sara (Melissa Leo) was a honey trap laid by sin-hating gun- (and Bible-)nuts. “Simple”, Keenan concludes, holding up his phone so that his commanding officer can hear the chaos all around, “just shit itself.” Indeed, had the title not already been taken, Red State might just as well have been called Blood Simple – for while it certainly flirts with the horror genre, especially in the scenes where the boys find themselves bound and at the non-existent mercy of a crazy redneck family, Smith’s film ends up being far more reminiscent of a Coens-style ‘clusterfuck’ (to borrow an expression from Burn After Reading), as misunderstandings accumulate, coincidences collide, and the body count rapidly escalates. Here preacher Abin Cooper, played with horrifyingly avuncular conviction by Michael Parks, is Smith’s equivalent to Anton Chigurh, embodying an unforgiving and infectious brand of righteous evil – and pitted against him is Keenan (Goodman is of course a Coen brothers regular), a decent man being reluctantly drawn (by cynical superiors no less than circumstances) into a reprise of the disastrous Waco siege, with plenty of innocents as the collateral damage. The violent face-off between these two men captures many of the polarised positions dividing the US today.

More secular in its satirical outlook than Smith’s previous Dogma (1999), Red State exposes the horror of not only religious but also political zealotry, while offering a tense, shocking ride through the ideological tinderboxes of contemporary Middle America. It is, however, also at times very funny, including as its last laugh a deus ex machina ending provided not, as Abin unshakingly believes, by a wrathful God, but rather by a bunch of unseen pothead pranksters who one suspects share Smith’s particular comic sensibility.