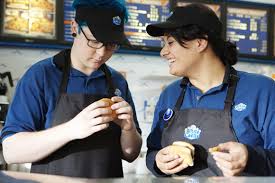 Synopsis: West Bank, 2003. Fed up with the humiliation of Israeli checkpoints and the Separation Barrier, sick of running into her ex-husband and his younger, thinner new wife, and worried that there is little future for her teenage son Fadi, bank clerk Muna Farah decides, having just won a green card, to emigrate to the Land of Opportunity. Questioned and searched for three hours by American customs, mother and son finally reach the Illinois home of Muna’s sister Raghda Halaby and the Halaby family, only to realise that they have mistakenly left all their savings behind. In the Arabophobic climate surrounding the recent invasion of Iraq, the medical practice of Raghda’s husband Nabeel is losing patients, and death threats in the post create frictions within the family. The only job Muna can get is serving at a burger bar, although she tells everyone that she is working for a bank. Gradually she befriends her young co-worker Matt, and also Fadi’s sympathetic new headmaster Stan Novatski.

Meanwhile Fadi is initiated into American teen culture by his cousin Salma, and finds himself clashing with fellow pupil Mike, whose brother is serving in Iraq. This clash leads to Muna herself being injured in the workplace, and the Halabys find out where she is really employed. When Fadi retaliates against Mike and is detained by the police, Stan intervenes on his behalf. The American chapters of the Halabys and the Farahs, joined by Stan, go out for a feast in an Arabic restaurant.

Review: Born in Omaha, Nebraska to a Palestinian father and Jordanian mother, Cherien Dabis has worked on several American TV shows ( The D Word, The L Word), and on short films set either in America (Memoirs of an Evil Stepmother, 2004) or in Palestine (the award-winning Make A Wish, 2006) – but for her feature debut Amreeka, named after the Arabic word for America (and formally dedicated to the writer/director’s family), Dabis has found a way to bring together the different aspects of her identity. If this bilingual, bi-cultural production is split into Palestinian and American sections, that only reflects a broader thematic preoccupation with divisions and borders, both abroad and at home.

Living in the West Bank during the Second Intifada, Muna (played with winning warmth by Nisreen Faour) must negotiate all the indignities and impediments of Occupation just to get from work to home every day – yet when she and her teenage son Fadi emigrate to America fewer than two years after 9/11, and shortly after the US invasion of Iraq, they find all their problems following them from the Middle East to the Midwest – where they are welcomed by US Customs with a lengthy and humiliating search. Despite her degrees and years of banking experience, Muna faces prejudice and rejection in looking for work, eventually taking a low-end job at a White Castle hamburger joint. Fadi, too, finds the conflicts of the Middle East replaying themselves in the corridors of his new high school. Meanwhile, despite having settled in Illinois 15 years ago, Muna’s sister-in-law Raghda and her doctor husband Nabeel start receiving Arabophobic hate mail and, as Nabeel is rapidly abandoned by his ‘patriot’ patients, they struggle for the first time to meet the mortgage payments on their middle-class home.

Though certainly politically engaged, Dabis’ film is equally interested in divisions of a more domestic variety. It is not clear what upsets Muna more about life in the West Bank: having to negotiate multiple Israeli checkpoints, or being forced to share territory with her hated ex-husband and his new bride. And in the US, Raghda and Nabeel’s home is not just beleaguered from without, but also becomes its own zone of apartheid from within, with  Nabeel exiled to the basement after an argument, with Muna and Raghda increasingly alienated from their Americanised offspring, and with one of Raghda’s daughters erecting her own Separation Barrier to demarcate her side of the bedroom from her sister’s.

“Every place sucks,” Muna tells Fadi when he complains of his disappointment in their American adventure, “The important thing is that you can’t let anyone make you question who you are.” Accordingly, this migrants’ tale, pitching itself somewhere between The Visitor (2007) and Little Miss Sunshine (2006), shows both the exclusion of, and ultimately the solidarity between, its many outsider characters – not just Muna and her extended family, but also Fadi’s headmaster Stan Novatski (“not many Polish Jews around here”) and Muna’s blue-haired White Castle co-worker Matt. The ending, in which Muna and her relatives all sit down together with Stan to an Arabic feast, may seem a little pat in its promise of a better future, but Dabis has carefully laid the groundwork to suggest that even if this momentarily happy family can get through the inflammatory politics of 2003, they are likely to come a cropper once again later in the decade when their high dependence on credit comes home to roost.