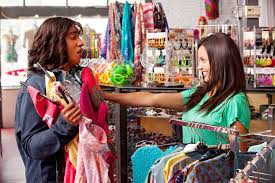 Synopsis: Atlanta, Georgia. FBI agent Malcolm Turner is overjoyed that his alma mater, Duke University, has just accepted his stepson Trent for admission, but Trent would rather pursue a career in hiphop. Desperate to get his stepfather’s signature on a music contract, the teenager tails Malcolm to a sting operation, and inadvertently witnesses the murder of Malcolm’s informant Canetti – although not before Canetti has revealed that an incriminating flash drive is hidden in a music box at the Georgia Girls’ School for the Arts. With Russian gangster Chirkoff and his two henchmen keen to silence Malcolm and Trent permanently, father and son disguise themselves as Big Momma and her great niece Charmaine, and go undercover at the School as House Mother and new student.

As they search for the flash drive, Malcolm must fend off the attentions of Kurtis, a security guard with a predilection for larger ladies, while Trent finds himself getting closer to fellow musician Haley than he normally ever could. After ‘Charmaine’ sets up a date between her new best friend at school and her ‘cousin’, an undisguised Trent meets Haley off-campus, attracting the attention of Chirkoff’s men. As ‘Charmaine’ performs a duet with Haley at the School’s talent showcase, he accidentally drops his falsetto, and a horrified Haley unwigs and unmasks him – right in front of Chirkoff. Malcolm and Trent, with Kurtis’ help, overpower the Russians in the library and retrieve the flash drive. Malcolm agrees to sign Trent’s music contract, but Trent opts for university instead.

Review: “Sister, are you a brother?”, security guard Kurtis Kool (Faizon Love) asks as he first begins to realise that the ample object of his affections may not be all that ‘she’ seems; and while Kurtis’ next words – “Oh no, not again!” – may comprise the film’s funniest line, and the closest it ever gets to a “Nobody’s perfect” moment, they also capture precisely what many viewers will feel about this thankless sequel.

Just as Alien (1979) gave rise to Aliens (1986) and Predator (1897) led ultimately to Predators (2010), it seemed inevitable that the Big Momma franchise would eventually spawn its own plural brood of monstrosities, and so, in Big Mommas: Like Father, Like Son, we get not one, but two unfunny men in drag, as Martin Lawrence’s FBI agent Malcolm passes down the wig, make-up and fat suit to his teenaged stepson Trent (Brandon T. Jackson).

Both on the run from murderous Russians, they take refuge in the Georgia Girls’ School for the Arts, where a macguffin in the guise of an incriminating USB drive is hidden. Yet as in the previous Big Momma’s House (2000) and Big Momma’s House 2 (2006) – the latter also, like this film, directed by TV veteran John Whitesell – here undercover police work takes a backseat to cross-dressing chaos. Still, it would be entirely inappropriate to compare this to such classic drag comedies as Some Like It Hot (1959), Tootsie (1982) and Victor Victoria (1982), or even to more middling fare like Mrs. Doubtfire (1993). For the only real analogues to Big Mommas: Like Father, Like Son are the other two Big Momma films, which share its rigorously unsophisticated and largely mirthless brand of humour. If you do not find endless amusement in the spectacle of black men making big tits of themselves while dressed as voluminous women, there is little else to make you laugh here. Non-fans of the franchise should not expect to be converted, and would be well advised to give this film a wide berth.

Not that Big Mommas does not try to broaden its audience. There is a new focus on the intergenerational frictions between Malcolm and Trent, not to mention a welter of Fame-style song-and-dance numbers, all evidently calculated to lure the teen dollar – while similar prominence is given to Trent’s (sort-of) voguish aspirations to be a professional rapper. The music, however, is forgettable, while the characters are too broadly drawn for their various relationship dramas to be taken seriously. Told by Malcolm that he should first attend university for four years, Trent objects, “D’you know how long that is in hiphop years?” Shorter, no doubt, than 107 minutes seem in Big Mommas time. It’s a drag, alright.