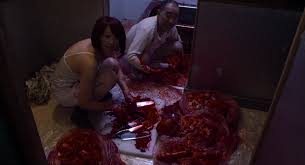 Synopsis: January, 2009 in Fujimi City, Japan. Shamoto Nobuyuki runs a small tropical fish outlet from the dysfunctional home that he shares with his jaded second wife Taeko and Mitsuko, the resentful teen daughter from his first marriage. When Mitsuko is caught shoplifting, middle-aged tropical fish salesman Yukio intercedes and invites the Shamotos to visit his much bigger ‘Fish Centre’, where his attractive wife Aiko suggests that Mitsuko move in and join the shop’s female staff. Yukio begins a sadistic affair with Taeko, who then persuades her husband to become Yukio’s business partner. Nobuyuki is introduced to Yukio’s ‘legal consultant’ Tsutsui and an investor named Yoshida, who is poisoned by Aiko as soon as he has handed over cash for a suspicious fish-breeding enterprise. Horrified, Nobuyuki is railroaded into driving Yukio and Aiko to an isolated shack where they expertly slice up Yoshida’s body for disposal. Trapped in his own fear and complicity, Nobuyuki helps Yukio and Tsutsui with their cover story. The police warn Nobuyuki that Yukio’s associates tend to vanish. Tsutsui asks Nobuyuki to help murder Yukio when the time is right – but when Tsutsui brings Aiko to his house for some extra-marital sex, she poisons him and his chauffeur. Again, Yukio makes Nobuyuki help them dispose of the bodies, but when he further insists that Nobuyuki toughen up and even have sex with Aiko, Nobuyuki stabs them both with a pen, and forces Aiko to finish her husband off and slice him up in the shack. After returning home, beating Mitsuko unconscious and raping Taeko, Nobuyuki calls the police and returns to the shack, where he kills Aiko in a b loody tussle. When the police arrive with Mitsuko and Taeko, Nobuyuki stabs his wife, and cuts his own throat in front of an exultant Mitsuko.

Review: In the mid-Nineties, in Japan’s Saitama prefecture, exotic dog breeder Sekine Gen and his common-law wife Kazama Hiroko poisoned at least four people, and then sliced up the bodies. The couple would eventually hang for their crimes, while Yamazaki Nagayuki, an employee who helped them dispose of the bodies, would receive a three-year prison sentence.

While this cause célèbre has clearly inspired Sono Sion’s Cold Fish, even the familiar authenticating formula ‘This is based on a true story’ with which the film opens pulses to a percussive score and is presented in an explosively bold and alienating English typeface that hardly seems to promise realism, let alone reality. A caption that appears moment later – “3-2, Saeki-cho, Fujimi City, Shizuoka, Japan” – may seem to locate the scene with documentary realism, but also confirms the filmmaker’s readiness to mix fact and fiction, since the real Fujimi City is in Saitama rather than Shizuoka, and played no part in the original case. Likewise there is no such place as Mount Harakiri – the location of the isolated shack where the corpses are meticulously dismembered – although it is not hard to see why Sono has fixed upon this name for a setting that will ultimately stage an act of suicide (also entirely unrelated to the facts of the real case).

Freely changing dates and names, introducing preoccupations (religious imagery, deviant sexuality, the legacy of parental abuse) familiar from his previous Love Exposure (2008), and outright inventing most of the details of his story (right down to the setting in the world of exotic fish trading), Sono is less interested in the facts of history than in more ‘cosmic’ truths about the human condition – much as his protagonist Shamoto Nobuyuki (Fukikoshi Mitsuru) seeks solace for his life’s disappointments in the (decidedly cinema-like) interiors of the local planetarium.

While repressed, passive Nobuyuki takes refuge from his dysfunctional home situation in the stars, his new business associate, the ‘fish maniac’ Murata Yukio, is his polar opposite: as outsized, outlandish and predatory as the aquatic creatures that he collects, this brash and impulsive monster leaves no appetite unchecked, and kills anyone that gets in his way, fully abetted by his oversexed wife Aiko (Kurosawa Asuka). Yukio proves irresistible to milquetoast Nobuyuki, becoming all at once his dark half, his rampaging id and his Tyler Durden – and yet even as Sono relishes the comedian Denden’s mercurial performance as Yukio, using a single handheld take to capture every beat in his sadistic seduction of Nobuyuki’s wife Taeko (Kagurazaka Megumi), the film remains for the most part focused, unflinchingly and uncomfortably, on the undemonstrative nobody Nobuyuki, as he struggles in vain against actions and emotions that, once let out of the tank, are not as easy to ‘make invisible’ as Yukio’s many victims.

Stylistically arresting, unbearably tense, darkly funny and devastatingly bleak, Cold Fish may, in all its violence, depravity and gore, prove hard work for some viewers – but as Yukio says, “Hard work brings rewards.”