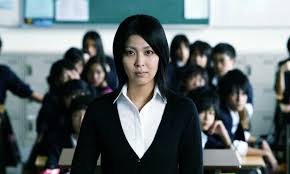 Synopsis: After informing her seventh-grade class that she is quitting, softly spoken teacher Moriguchi Yuko offers one final lesson on the value of life. She tells of how her fiancé, the teaching theorist Dr Sakuramiya, recently died of AIDS-related complications – but not before their 5-year-old daughter Manami was found drowned in the school’s pool. She then describes how she worked out that Manami was in fact murdered by two pupils – academically gifted Shuya and his low-achieving accomplice Naoki – who both, when confronted, had admitted their part in the crime. Finally, she reveals that the milk just drunk by the two boys was spiked with HIV-infected blood.

Next term, the pupils (apart from suicide-obsessed Mizuki) bully Shuya, while sending coded hate mail to the absent Naoki through Moriguchi’s clueless replacement Terada. As Naoki’s mental health declines, he tells his mother of the HIV in his blood, and of the greater role he played in Manami’s death than even Moriguchi realised. Horrified, his mother plans to kill first him and then herself – but Naoki kills her and is arrested. Meanwhile, after testing negative for HIV, Shuya starts going out with Mizuki, and reveals to her that his every action has been designed to attract the attention of his estranged mother. Mizuki relays this nifer-aniston, nicole-kidman, finformation to Moriguchi. Shuya murders Mizuki.

Confused by an e-mail received unexpectedly from his mother (and in fact sent by Moriguchi), Shuya posts a video testimony online stating his intentions to blow up himself and his fellow pupils with a homemade bomb – but Moriguchi intercepts the testimony, and secretly moves the device from the school to the workplace of Shuya’s mother. After Shuya has detonated the bomb, Moriguchi reveals to him that he must live with having killed his mother.

Review: The lessons of cinema are best taught in images rather than words, so Nakashima Tetsuya’s decision to open Confessions (Kokuhaku) with what is in effect a 30-minute monologue might at first sound foolhardy – but in adapting Minato Kanae’s best-selling six-part serial novel, Nakashima has found an audiovisual language that transforms his film’s first ‘confession’, delivered by teacher Moriguchi Yuko (Matsu Takako) to her middle-school class, into something that feels right at home on the big screen. The pupils, at least at first, are bored and boisterous, throwing objects about, texting each other, moving around the classroom, or even leaving altogether for some baseball and bullying on the school’s roof. All this unruliness contrasts with the speaker’s quiet monotone and affectless demeanour, which slowly draw in both her immediate audience and the more general viewership. Meanwhile, by presenting all the ambient activity in elegant slow motion, and orchestrating it to a subdued guitar score that builds, ever so gradually, to a raucous crescendo, Nakashima ensures that we never lose focus on either Miss Moriguchi or her story. Here, as her lesson on life turns into a shocking public accusation and a revenge served very cold, Moriguchi is like the mesmerising calm at the centre of an explosive storm.

The rest of the film traces the repercussive ripples of that explosion, both backwards and forwards in time. Unfolding, like Minato’s novel, in a series of further confessions  – a dreamy (and unsent) e-mail, a diary entry and suicide note, a crazed staircase soliloquy, a disingenuous video testimony, a frank phone message – the narrative is an uncomfortable tapestry of truth and lies, crime and punishment, cause and effect, where a bursting bubble can lead, years later, to a more destructive detonation (with both events shown running forwards and backwards in crisp slow motion). Gradually we learn what drove over-achieving Watanabe Shuya (Nishii Yukito) and under-achieving Shimamura Naoki (Fujiwara Kaoru) to commit the cold-blooded murder of their teacher’s young daughter, and what price they will eventually pay.

Shuya is loved too little, and Naoki too much, by their respective mothers – so it seems oddly appropriate that the boys’ initial punishment should involve milk, that most maternal of drinks, being used as a vehicle for poison. In the world of Confessions, redemption is certainly possible – after all, Moriguchi’s late partner Dr Sakuramiya was a one-time delinquent who went on to become an inspirational pedagogical theorist – but Moriguchi, herself a bereft mother, vindictively refuses her young wards any hope for recovery or reform, and coldly manipulates their tragic downfalls, matricide and all. Moriguchi may utterly outclass her pubescent pupils, but she is also a rational adult who allows herself to become as disconnected and casually cruel as the young people whom she is supposed to improve, so that even the confused misfit Kitahara Mizuki (Hashimoto Ai) will soon cite Moriguchi’s own example as a justification for further murder. As revenge scenarios go, this is responsibly disorienting, setting out moral equations with no easy solutions.

Nakashima’s Noughties films Kamikaze Girls (2004), Memories of Matsuko (2006) and Paco and the Magical Book (2008) have associated him with vibrant colours, but in Confessions he restricts himself to a restrained palette of cool blues and subdued greys, in what often seems like an extended emo music video (with Radiohead actually included on the soundtrack). This drab colour scheme, as well as the sedate pacing and a dreamily detached vibe, all distract to an extent from the shrill melodrama of a film that turns out to be a bombastic, almost operatic affair, as overwrought as it is overwordy. Nakashima delivers his Heathers-like satire with a determinedly straight face – at least until the final punchline gives the game away, echoing Shuya’s catchphrase “Just kidding”. Here, Moriguchi’s elaborate educative scheme reduces to a bitter joke any possibility for her pupils’ improvement – and school’s out with a bang.