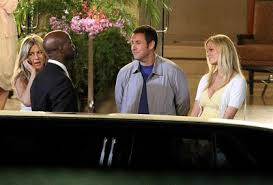 Synopsis: Just left heartbroken at his own wedding, Danny is drinking away his sorrows when he discovers ‘the power of the wedding ring’ to attract women looking for no-strings sex. Twenty years later, and practising plastic surgeon Danny still regularly uses the ring as a pick-up aid – but after sex on the beach with 23-year-old Palmer, decides that she is the one. When Palmer spots the ring, divorced mother (and Danny’s assistant) Katherine agrees to pretend to be the wife from whom he is about to get a divorce. One lie leads to another, and soon Palmer is insisting on meeting first Katherine – who she thinks is called Devlin (in fact the name of Katherine’s nemesis from college) – and then Katherine’s young daughter Maggie and son Michael, whom she believes also to be Danny’s children. Michael exploits the situation to blackmail Danny into giving everyone a Hawaiian vacation – where they are joined by Danny’s cousin Eddie, who pretends to be Katherine’s current lover. There Danny hopes to propose to Palmer.

By chance, the real Devlin is staying in the same resort with her wealthy husband Ian, and Katherine’s abiding sense of rivalry leads to a deception of her own: that Danny is her loving husband. One evening, as Danny and Katherine join Devlin and Ian at a couples’ dinner, Danny realizes that he is actually in love with Katherine. That night Palmer suggests that she and Danny get married the very next day – but Danny marries Katherine instead.

Review: “The first rule of improv”, according to Maggie (Bailee Madison), a young girl with a penchant for amateur dramatics (and cinema’s worst fake Cockney accent since Dick van Dyke starred in Mary Poppins), is this: “If someone says something, just go with it – no negation.”

She is explaining to her brother Michael (Griffin Gluck), their mother Katherine (Jennifer Aniston), and Katherine’s long-time boss Danny (Adam Sandler), how best to carry off pretending to be a family. Danny is no stranger to such masquerades. Committed only to his own bachelorhood, he has spent the last two decades wearing a wedding band as a lure for no-strings sex – until, that is, he meets the girl of his dreams, 23-year-old ‘hottie’ Palmer (Sports Illustrated covergirl Brooklyn Decker). When, however, Palmer discovers his ring, Danny and Katherine concoct a ruse to convince the young woman that Danny is in fact a married man and a good father, now perfectly available since he is signing for an amicable divorce.

Maggie’s words also supply the latest of Adam Sandler’s Happy Madison productions with its title Just Go With It, changed from Pretend Wife shortly after Nicole Kidman joined the cast (as Katherine’s old bête noire Devlin). Yet for all Maggie’s stress on the liberating power of improvisation, there is little here that does not seem calculated, and that has not been built on already over-familiar routines. Here we find such well-worn rom com tropes as the fake couple who end up becoming a real couple (Green Card etc.), the long-term friends who realise they make a perfect couple (When Harry Met Sally, etc.), and even a Cinderella­­-style makeover for Aniston (whose famous hair is apparently ‘neglected’) – as well as that old comedic staple, the absurdly escalating deception. “Why don’t you just tell the truth?”, Maggie asks early on. If Danny did. there would be no movie; but the lies that accumulate, especially when Danny’s cousin Eddie (Nick Swardson) shows up claiming – without good reason – to be a German online ‘sheep shipper’ named Dolph Lundgren, plausibility is stretched to a point way beyond where Palmer, let alone any self-respecting viewer, could ‘just go with it’.

If the plotting seems less impromptu than over-rehearsed, that is because this is a remake of Gene Saks’ award-winning Cactus Flower (America’s seventh highest grossing film of the year 1970), adapted by I.A.L. Diamond from Abe Burrows’ 1965 Broadway production of the same name, which was itself adapted from Pierre Barillet and Jean-Pierre Gredy’s play Fleur de cactus. The story remains essentially the same, although added ‘refinements’ include the odd pop cultural reference, some gross-out humour (the kiss of life administered to Goldie Hawn in Saks’ film is here transferred to an unconscious sheep), and some picturesque Hawaiian backdrops. Danny is now a plastic surgeon rather than a dentist, but even as the film ridicules Danny’s patients for both their grotesquery and their shallowness (as though these were somehow the same thing), it repeatedly exhibits both qualities itself.

Having already directed Sandler five times before, Dennis Dugan knows exactly what the comedian’s fans want from their Sandler vehicles. For everyone else, though, the pained, preternaturally whining laugh that comes from one of Danny’s excessively nipped, tucked and botoxed friends will encapsulate the natural response to this overwrought, and largely botched farce.