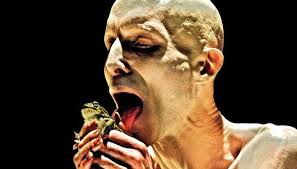 ‘Here’ is an Alpine woodland known as ‘the Shadow’, where David (Muxworthy) is catching up with some mountain biking. “It’s my life,” he explains to fellow cyclist Angeline (Karina Testa), “it’s the only time I truly feel at peace” – and surely this veteran of the violence and aggression of the Iraq War deserves a little rest and recreation. Yet there is trouble in this ‘bikers’ paradise’, as the sylvan idyll is disrupted by the arrival of a pair of belligerent hunters (Chris Coppola, Ottaviano Blitch) intent on bagging themselves some human prey.

The second film (after 2007’s Nero Bifamiliare) to have been directed by Italian electro-folk band Tiromancino’s front man Federico Zampaglione, Shadow begins by presenting itself as a Deliverance-style clash of civilisation and bestiality in the wilderness, before veering violently off track into the terrain of ‘torture porn’ when David wakes up to find himself and the hunters strapped to table-beds in an underground chamber of horrors at the mercy of a silent, implacable tormentor. For all their conventionality in genre terms, Zampaglione handles both these scenarios convincingly enough to wrong-foot viewers, while further disorienting us with hints (via a local wartime ghost story told by Angeline) of a supernatural subtext.

All the different elements come together in the emaciated figure of the torturer. When he is not dressing up an anatomical mannequin or licking the back of a psychoactive toad, this ghoulish presence is himself something of an amateur filmmaker (in the genre of real horror), shooting his own victims’ sufferings on an ancient camera while also collecting filmreels of human atrocities (with labels ranging from ‘Hiroshima’ to ‘Abu Ghraib’) amongst his other war memorabilia. Zampaglione fully exploits the alarmingly cadaverous physique and sensual movements of Nuot Arquint, a dancer and actor previously seen in The Passion of the Christ (2004) and Il Divo (2008), to create perhaps the most rivetingly creepy on-screen embodiment of death since Max Schreck’s Count Orlock in Nosferatu (1922).

Co-writing with his father Domenico, Zampaglione links backwoods slash-and-dash and scenes of shocking torture to broader geopolitical themes by way of a twist borrowed from Jacob’s Ladder (1990), which he slyly acknowledges by lifting the narrative veil at precisely the moment that David is seen ascending the rungs of a ladder. The film’s commentary on the horrors of fascism and war is at times lazy, too readily falling back on the imagery of Nazism (which admits no moral shading), and even at one point impishly juxtaposing images of Hitler, Stalin and a smirking Bush Jr., but there is much to be admired in the way that different genres are here both combined, and to a degree transcended, as cinema’s vehicles of fantasy are brought face-to-face with the one reality from which respite can only be temporary and escape is ultimately impossible.

Synopsis: Iraq War veteran David is cycling in an Alpine hinterland known as The Shadow. Stopping at a mountain chalet with a friendly bartender, he intervenes when two aggressive hunters, Fred and Buck, harass a young woman. Later, when David loses his tent in a high wind, the woman, Angeline, helps him out. She tells him a local legend about part of the forest being haunted ever since the wartime massacre of a village’s entire population.

After another violent run-in with Fred and Buck, Angeline and David become separated as they flee into the woods. In pursuit, both hunters are attacked by an unseen figure. At night, David reaches an isolated homestead where he is chased and knocked out. He wakes strapped to a table, with Fred and Buck similarly restrained. A half-naked, emaciated figure films himself first cooking Fred alive on the table, and later cutting out David’s eyelid. David manages to free himself, releasing Buck and the hideously burnt Fred as well. As they flee the building, David hears Angeline calling his name, and heads back. Fred and Buck are killed in the woods.

Searching for Angeline amongst war memorabilia, atrocity film reels, and burnt corpses, David bayonets his tormentor, and ascends a ladder towards Angeline’s voice. He wakes in a field hospital in Iraq, beside his now dead fellow soldiers Fred and Buck. The bartender and Angeline are in fact the doctor and nurse who have snatched David from death – although he has lost both legs.