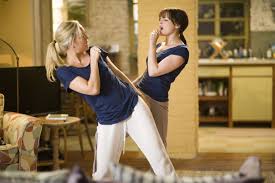 Synopsis: At her 30th birthday party, Rachel reveals to Dex that six years ago she had a crush on him, and they then sleep together – despite the fact that Dex is due to marry Rachel’s self-absorbed best friend Darcy in 61 days. Oblivious to the affair, Darcy tries to set Rachel up with lothario Marcus, while Rachel’s long-term confidante Ethan desperately avoids the advances of needy Claire. As the weeks, Rachel and Dex struggle to reconcile their rekindled feelings for one another with their sense of loyalty, guilt and duty, all the while concealing their on-off entanglement from everyone else – not that anyone besides Ethan notices, and he is about to move to London.

Darcy confides in Rachel that she has cheated on Dex, who has recently stopped having sex with her. Conflicted, Rachel tells Darcy that she should still marry Dex – much to Ethan’s frustration. When Rachel eventually declares to Dex that she wants to live with him, he tells her that he cannot. Crestfallen, Rachel visits Ethan in London. Ethan reveals his own love for Rachel, and his belief that she still loves Dex. Rachel returns to New York, to find that Dex has called off the wedding to be with her. Dex hides when Darcy arrives to express her relief that the marriage is over, now that she is pregnant by Marcus. Seeing Dex, Darcy turns her back on Rachel – but two months later the friends make up. In a coda, a horrified Ethan is ambushed in London by Darcy, suitcases in tow.

Review: “Why aren’t we doing what we really want to do?”

This is what unhappy lawyer Rachel (Ginnifer Goodwin), just turned 30 and therefore apparently past her “prime child-bearing years”, asks her one-time would-be boyfriend Dex (Colin Egglesfield). Since romantic comedy is the cinematic mode of wish fulfillment, naturally these two sleep together that very night, as they had wanted to do six years earlier; but the complications and delayed satisfactions also demanded by the genre are instantiated by Dex’s imminent marriage to Rachel’s long-term best friend Darcy (Kate Hudson). Cue plenty of moral dilemmas, soul-searching and lightweight angst, as Rachel and Dex struggle to resolve their conflicted feelings of love, loyalty and duty with often little more than their own frustrating indecisiveness to motor the plot towards its genre-bound happy ending. As their relationship wavers between on and off with dreary repetition, the location ping-pongs between New York City to the Hamptons – with a quick stopover in London – lending the otherwise stymied story the illusion of momentum. At least it is picturesque, with Luke Greenfield (The Girl Next Door, The Animal) offering safe, if undistinguished, direction.

The adaptation is from Emily Giffin’s 2004 novel of the same name, but there is also ‘something borrowed’ from My Best Friend’s Wedding (tellingly, one of the mnemonics concocted by Rachel for the principles of Tort Law is “Don’t Blame Cameron Diaz”), and something else from 27 Dresses, while the scene in which Rachel draws on her own heartfelt sentiments to compose Darcy’s wedding vows is straight out of Cyrano de Bergerac ­– albeit with less wit. The one apparent breach of generic convention, the heterosexuality of Rachel’s male confidante Ethan (John Krasinski), is purely cosmetic – as is demonstrated by his spending half the film pretending to be gay. Similarly in the opening scene Rachel must ‘act surprised’ at the party she has already predicted Darcy is throwing for her – an apt introduction to a film where there are no real surprises. This extends to the necessary demonisation of Darcy, in part for the very infidelity, deceit and self-absorption that in fact Rachel too displays, so that we are somehow better able to sympathise with Rachel getting her man in the end. A post-credits coda threatens a sequel which would feature yet more of the insufferable Darcy’s shallow idiocy – proving that you can’t always get what you want.