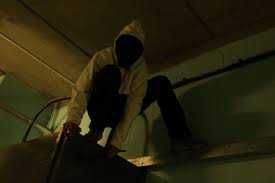 Call a film F, in particular when that letter expressly stands for ‘Fail’, and you are practically inviting a cruel critical response – yet despite its setting in the world of contemporary education, there is something attractively oldschool about Johannes Roberts’ hoodie horror, be it the the ’80s-style masked slash-and-dash in a comprehensive’s corridors, youth-on-teacher violence that harks back to Class of 1984, The Principal and One Eight Seven, or the Argento-aping soundtrack of echoing whispers and hummed nursery tunes.

Eleven months after being physically assaulted by a pupil in his own class and hung out to dry by the school authorities, English teacher Robert Anderson (David Schofield) is a broken man – estranged from his beloved wife and daughter, addicted to the bottle, and unhealthily obsessed with the growth in adolescent violence. So when one night his school comes under murderous attack from a gang of silent, hooded youths, it is the realisation of all Robert’s worst nightmares.

F effortlessly converts Noughties anxieties about the generation gap into genre thrills, while bringing an unusual psychological resonance to all the breathless cat-and-mouse by focussing not on the identities and motives of the faceless assailants, but instead on the creepy, somewhat unhinged persona of the teacher whose fears appear to have conjured them. If the dilemma-driven ending seems to come out of nowhere, it will also send your mind back through the film’s empty rooms and hallways in search of a rational explanation for everything that has happened. Boasting a wonderfully hangdog central performance and gore that is all the more effective for its infrequency, Roberts’ film is a solid A minus.