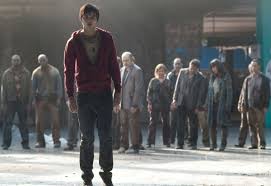 If humans and zombies have always observed an uneasy apartheid, then it took Warm Bodies – both the 2010 novel by Isaac Marion and now the film adaptation by writer/director Jonathan Levine (All The Boys Love Mandy Lane, The Wackness, 50/50) – to realise, in this yawning, yearning gulf between the living and the dead, the potential for tabu teen romance along the lines of Romeo and Juliet.

Not that this film lacks even for non-Shakespearean antecedents. Although Shaun of the Dead (2004) was promoted as the first ever ‘rom-zom-com’, that title should really go to Braindead (1992) or Return of the Living Dead III (1993), while the latter already featured romance between a human and a zombie – something which has since been repeated in, e.g, Boy Eats Girl (2005), Fido (2006) and DeadHeads (2011). Meanwhile, Warm Bodies takes its place amongst several recent mash-ups of classical literature and undead subgenre, alongside the best-selling 2009 novel Pride and Prejudice and Zombies (soon itself, inevitably, to be a film) and this year’s indie My Fair Zombie (2013). Indeed, zombie films, like zombies themselves, may keep coming back, but the rotten ones proliferate so fast that it is a constant challenge to stay ahead and try to find anything that has retained a modicum of freshness.

Levine’s first innovation is to place zombie protagonist R (Nicolas Hault) right at the very centre of things – not just following his undead perspective as in Marc Price’s Colin (2008), but also making him the film’s narrator, with a smart, ironic voice-over that belies his clumsy, shuffling form and neatly reverses the maxim that dead men tell no tales. The film opens with R asking, “What am I doing with my life? I’m so pale, I should get out more, I should eat better, my posture is terrible, I should stand up straighter – people would respect me more if I stood up straighter. I just want to connect . Why can’t I connect with people?” Seconds later he will provide the simple answer, “Oh right, it’s because I’m dead” – but not before his words, an all-too-familiar expression of youthful outsider angst, have made him a relatable figure for the film’s target emo-graphic. Unsurprisingly, as R(omeo)’s Julie(t), Teresa Palmer will closely mimic Kristen Stewart’s every last hair-twitching, eye-rolling mannerism to ensure that the Twilight tourists in the audience get exactly what they are paying for.

“What are you?” Julie will ask, puzzled as to why R has rescued rather than eaten her, and why he seems able to talk (even if he is far less articulate in person than the voice of his inner monologue would suggest). In fact, both in his ability to speak basic words or phrases, and in his particular hunger for human brains, R most closely resembles the zombies from the Return of the Living Dead series – but he is nonetheless something new, able to visit the memories of those (like Julie’s ex-boyfriend Perry, played by Dave Franco) whose cerebellum he devours, and increasingly humanised by his contact with Julie. Here, it turns out, the cure for being undead is love love love, and once R’s heart starts beating again, his renewed hunger for human warmth will start spreading through the zombie community like a second virus.

Warm Bodies includes many of the conventional tropes of a romantic comedy (the meet-cute, the makeover, ‘meet the parents’, etc.) while giving each one a strange, even unnerving spin. When R lays eyes on Julie, for example, it is love at first sight, even if she is at the time down on one knee repeat-firing her rifle at the zombie horde (including R) that is attacking her platoon – and it is probably just as well that she is too busy shooting to notice R chowing down on his human rival for her affections. “Don’t be creepy,” R will tell himself as he tries to approach Julie – but there is something undeniably creepy about the way this hoarder tries to add Julie to his collection of found objects and to keep her there, or keeps secretly eating more of Perry’s brains to steal intimate insights into his beloved, or spends his sleepless nights staring at Julie as she slumbers. If the zombie-ism of Warm Bodies allegorises adolescent alienation, then our romantic hero comes across as both halting talker and possessive stalker.

Other romantic clichés are similarly exhumed and revitalised. Julie and her confidante Nora (Analeigh Tipton) will use makeup to give R a Cinderella-style transformation, but this is as much to conceal his scars, putrescence and deathly pallor as to reveal his inner beauty. When R’s best zombie friend M (Rob Corddry) learns that Julie has split on R, his consolatory response, “Bitches, man”, suggests that the humanity to which M is returning, in parallel to his returning speech, is bound in a casual misogyny – as though R’s relationship troubles with Julie had as much to do with her being a woman as being a living, breathing non-zombie that the undead would sooner kill than kiss. And when R is eventually introduced to Julie’s zombie-hating father Colonel Grigio (John Malkovich), the leader of the human survivors responds by trying to put a bullet in the head of his daughter’s beau, taking parental disapproval to new, post-apocalyptic extremes.

The most unusual aspect of Warm Bodies – the primacy of R – does bring with it notably poor characterisation for everyone else. Julie may first appear a kickass rebel, but very quickly reverts to the default rôle of passive damsel in distress, there chiefly to be saved and to provide a sounding board for R’s emergent emotions. Even the welcome presence of Malkovich cannot elevate Grigio above the cartoonish, while Perry evinces little more personality than the CG ‘bonies’ who represent zombies at their most dehumanised and skeletal. So while Levine’s film may distinguish itself both as genre flick and romance, there are problems in its writing that no amount of unnatural love can quite cure.