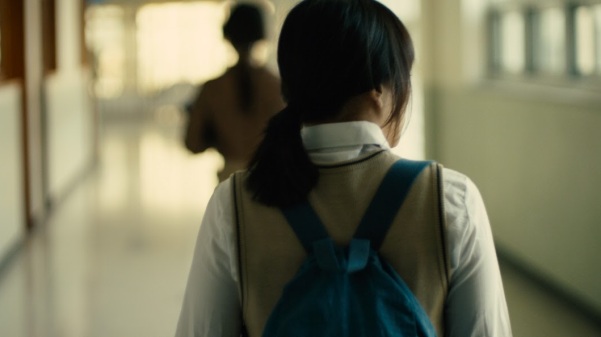 Eun-hee (Jung In-sun) and her friends in their school a cappella choir have secretly recorded transfer pupil Han Gong-ju (Chun Woo-hee) singing, and sent a copy to an agency that now wants to meet the talented young girl. Yet faced with this ‘big chance’, Gong-ju reacts only with fear and anger, turning on her fellow pupils for not first seeking her consent. In her attempts to get away from the confused, imploring Eun-hee, Gong-ju accidentally locks herself into the school’s sportsfield – which leads Eun-hee to utter these words.

There’s no way out for Gong-ju in more respects than one. While, like any adolescent, she is in transition – marked by her move to a new school and a new home, by her emergence as a gifted singer, by her learning for the first time to swim – she is always looking behind her at a past of trauma and betrayal that seems never fully to let her get on with her life. Not so long ago, with her divorced, alcoholic father away for work, Gong-ju found herself playing unwilling hostess to a gang of well-connected boys who, first invited over by Gong-ju’s best friend Hwa-ok (Kim So-young), forcefully overstay their welcome and make Gong-ju a prisoner, along with Hwa-ok, in Gong-ju’s home. In different ways, both girls do – and don’t – manage to escape.

Drawing many of its details from a notorious real-life incident dating from 2004, Lee Su-jin’s feature debut flips between Gong-ju’s tentative, difficult strokes towards a better future, and the gradual revelation of her harrowing past. Bridging these two time periods, and embodying the persistence of history, is Hwa-ok’s ghost, continuing to haunt Gong-ju’s present like a troubled conscience, or like vaginal wounds that will not easily heal. “It’s not my fault I became a vampire”, Hwa-ok declares to Gong-ju, before asking more desperately, “It’s not my fault, right?”. Certainly Hwa-ok was not responsible for the two marks in the neck of their mutual friend, the bullied Dong-yoon (KimChoi Young-joon) – but in the heady community atmosphere of guilt, shame and recrimination that followed the incident in which all three of these teens had become trapped, Gong-ju’s struggles to get away from the taint of what has happened shut her off from the present.

Contrasting the selfishness and corruption of Gong-ju’s home district with the straightforward goodness of Eun-hee and of the middle-aged woman (Lee Young-lan) who takes Gong-ju in, Lee’s sink-or-swim narrative exposes the seemingly insurmountable venality and injustice of Korea’s social structures, while keeping its focus primarily on Gong-ju herself as a vehicle of both despair – and of hope too. There may be a way out after all, if Gong-ju can just keep her head above water.