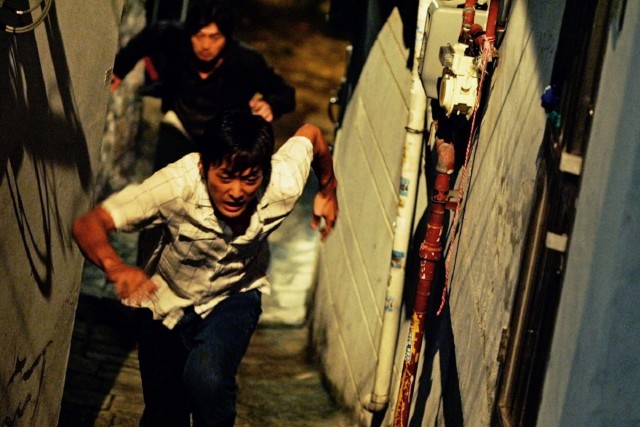 Synopsis: Na Hong-Jin’s feature debut is a noirish dash through the very s(e)oul of Korea in search of a serial killer.

Review: “Sir, I made a mistake, I should make up for it.”

So says Jung-Ho (Kim Yoon-suk) to the nervous young man whose car he has just accidentally hit. And although he does not yet realise the full import of his words, Jung-Ho will indeed spend this one long, dark, rainy night trying to atone for all the sins of his past.

Jung-Ho is a fallen man. A one-time police detective turfed out for taking bribes, he is now a strong-arm pimp struggling to pay off a mountain of debt while the women on his list keep vanishing without trace. His well-earned nickname is ‘Filth’. He sends one of his last remaining callgirls, Mi-Jin (Seo Yung-hee), out to a client with the words, “Better get to work before you regret it,” callously dismissing her bad case of ‘flu and oblivious to the fact that she is leaving behind a young daughter (Kim Yu-Jung).

But then the detective within him realises that the same client whom Mi-Jin is meeting is probably responsible for the disappearances of the other girls, and so Jung-Ho sets off to reclaim his ‘property’, or at least some kind of compensation for their loss.

What he has not yet comprehended is that the client, Young-Min (a chilling Ha Jung-woo), has not sold the girls on, but rather murdered them. A softly spoken psychopath with a penchant for cracking skulls with a chisel, Young-Min is also the man whose car Jung-Ho has just dented. Over the next few hours their paths will cross several more times, as Jung-Ho, himself no stranger to mistreating women or cracking heads, begins to understand the true nature of both himself and what he is confronting. As the one races to save Mi-Jin, and the other to finish her off, in a city that seems to care little about her fate, and under the conspicuous gaze of neighbourhood crucifixes, the chase is well and truly on.

With its rain-swept streets, its gutter-level corruption, and its sullied protagonist on a mad dash for redemption, Christian director Na Hong-Jin’s feature debut is a bleakly frantic psycho-noir, furiously edited, ferociously performed – and despite allying itself to the serial killer genre so beloved in the west, it is distinctly Korean in its settings and references.

Here, as in Chan-Wook Park’s Oldboy (2003), the main character is a bullish monster of a man, racing against the clock to solve a mystery, and at one point even wielding a hammer as a weapon. Here too, as in Bong Joon-ho’s Memories Of Murder (2003), the frame of a serial killer investigation is used to expose systemic flaws in Korean justice and society, although, with its insistently contemporary setting, The Chaser (Chugyeogja) does not even offer viewers the solace of seeing its problems being projected onto some reassuringly distant past. And like so many films to emerge from Korea’s New Wave, The Chaser wears the trappings of genre merely to confound its viewers’ expectations, making this a heady mix of high tension, black humour, carefully judged sentiment and harrowing horror.

Unfolding with an economy to match its relentless pace and hyper-realistic style, The Chaser never stops pounding away at the viewer’s skull, and it is only after the final credits have rolled that its melancholic morality has some breathing space to catch up. Here, hunter and quarry may not be so very different, but by the end, in this collision of uncomfortably similar values, at least one party is trying to make up for his mistakes.

In a nutshell: This mad-dash race to save (or take) a young mother’s life through the winding by-roads and dark alleyways of Seoul’s suburbs makes for a frantic psycho-noir, by turns bleak, funny and horrifying.