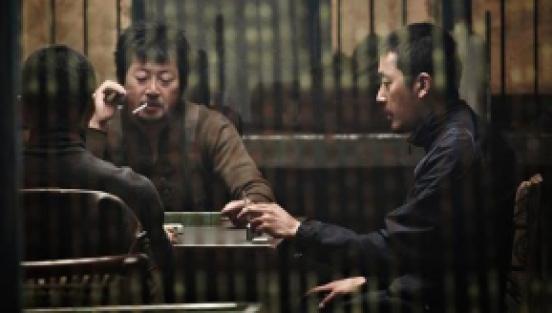 Synopsis: Hot on the heels of The Chaser, Na Hong-jin’s second feature is an equally breathless tale of exile, assassination and existentialism.

Review: The Yellow Sea (Hwanghae) opens with its anti-heroic protagonist Gu-nam (Ha Jung-woo) recounting in voice-over an anecdote from when he was just 11 years old: after his dog had gone on a murderous frenzy with rabies, it ran away from the vengeful neighbours, returning home days later to die pitifully – not that that stopped the neighbours from digging up its corpse to eat. “The reason I thought of it,” comments the now adult Gu-nam, “was because the rabies that had vanished had come back.”

Sure enough, dog-eat-dog madness, desperate flight and the urge to return will become the dominant themes of Na Hong-jin’s second feature. It is the first ever Korean film to have received substantial funding from a major Hollywood studio (Fox), attracted no doubt by the breathless intensity of Na’s extraordinary debut The Chaser (2008).

The Yellow Sea shares not only that film’s preoccupation with sweaty street-level criminality and elaborate pursuit sequences, but also its all-important DP (Lee Sung-jae), editor (Kim Sun-min) and two leads (again caught in a game of deadly cat-and-mouse with each other, albeit in rather different circumstances). But the plot that it unravels is more reminiscent of ‘Derek’ Yee Tung-shing ‘s One Nite In Mongkok (2004). For here too an outsider crosses the sea, seizing upon a hitman’s contract as an opportunity to look for his missing lover, only to run aground on the vagaries of fate and the cruelties of his fellow men.

Gu-nam is a Joseonjok, or ethnic Korean, from Yanbian Korean Autonomous Prefecture in Northeast China. His work as a cabdriver will never pay off the massive debts that he has incurred purchasing a visa for his wife to find employment in South Korea – and, to make matters worse, she has dropped out of all contact and stopped sending back money. So local gangster Myun Jung-hak (Kim Yoon-suk, star of The Chaser) makes Gu-nam a tempting offer: in exchange for murdering a man in Seoul, Gu-nam can also look for his wife while there (“you can bring her back or kill her”), and return with all his debts cleared.

After a nightmarish voyage across the Yellow Sea, Gu-nam’s every effort in Seoul will fail, with the trail to his wife going very cold, and someone else beating him to the kill. In the frame for a murder that he did not commit (but certainly intended), and pursued by the police, by a local crime syndicate, and soon also by Myun and his gang of axe-wielding Joseonjoks, the cornered Gu-nam decides to “find out who started this, how it happened” before making his final journey home.

The result is a gripping existentialist thriller, where jealousy, greed and desperation, the most basic (and base) of human impulses, lead inexorably to a chaos of carnage, and where exile and death cross their borders to merge into an emotionally-charged sequence of final images.

Caught between two nations, Gu-nam is always at sea, tossed and buffeted by whatever the tide brings – and the struggles of this doomed desperado to keep his head above water are heroic precisely for their futility. And so, in a strategy that will be familiar to anyone who has been catching Korea’s New Wave of cinema, Na deftly weaves social realism into an engaging confusion of genres, turning The Yellow Sea from noirish crime procedural to energetic chase movie to ultraviolent revenge flick, without ever losing sight of the human tragedy inherent in its human dramas.

Hitting international shores in a Director’s Cut some 16 minutes shorter than the original Korean theatrical release (the differences between these two versions are detailed here), The Yellow Sea is as taut, tight and muscular as it is bleak, while Kim Yoon-suk’s Myun, whether armed with hatchet, knife or barbecued lamb’s shank, makes for one of the most mesmerisingly monstrous villains ever to have rampaged across the screen. Yet despite its frenetic pace, the film remains just as memorable for moments of stillness and melancholy. After all, every dog may have his day, but Gu-nam, like his childhood pet, knows exactly what awaits his return.

In a nutshell: With this bleak, blistering thriller Na Hong-jin consolidates his position as one of Korea’s most important – and exciting – directors.